Saturday, Sept. 9, was supposed to be the perfect day. Justin Murphy and Katherine McKoy planned a sandy-toes wedding on Clearwater Beach for months. Only, the ceremony never happened. 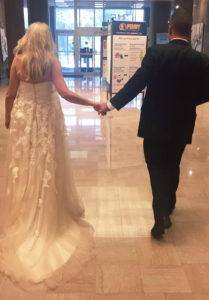 Hurricane Irma crossed over land as an enormous Category 4 storm. It made its way up the east coast of Florida the same weekend that Justin and Katherine were set to tie the knot. Nearly 150 guests were supposed to be in town to witness the ceremony. Justin alerted everyone on Wednesday, Sept. 6, that the wedding would have to be put off due to the nasty weather. Safety was the top priority.

The next morning, the couple went down to the Pinellas County Courthouse in suit and gown. Their marriage was made official, albeit without the beautiful sunset they’d hoped for. Then they remembered the flowers. Nearly $2,000 worth of beautifully arranged bouquets would go to waste because of Hurricane Irma’s timing. The Murphys were determined to find a good home for them.

They settled on donating to Dunedin nonprofit, Random Acts of Flowers. The organization takes gently used flowers and distributes them around the community to places like nursing homes and hospitals in hopes that a few pretty petals may bring a smile to someone who needs them. In all, Justin and Katherine’s flowers were able to generate 170 bouquets for Random Acts of Flowers to hand out.

“We are so glad to see a tough and sad situation turned into a positive one,” Justin wrote in a blog post for the nonprofit.

The donation helped RAF hit a long-awaited milestone. The group was able to finally hit a the 50,000-donated bouquet mark they’d been striving towards for years.

The flowers were donated the next week. On September 18, RAF donated its 50,000th bouquet to residents at Florida Hospital North Pinellas who needed to be evacuated because of Hurricane Irma. 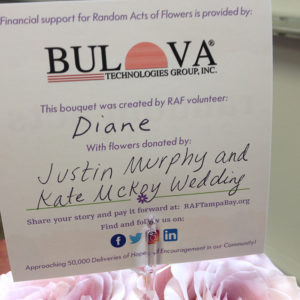 “My grandmother is in the hospital and she wanted to thank all of you for the flowers that were given to her out of the kindness of your hearts!” said Julie, a family member of a woman who received flowers. “It really made her happy! All I wanted to see was a smile on her face and she smiled like a ray of sunshine!”

The glorious wedding that Justin and Katherine planned didn’t quite work out according to plan, but the kind gesture to donate their unused flowers brought some joy to a few strangers that may have needed it most. “It was bittersweet,” said Katherine. “I knew it was going to people who would greatly appreciate them but it was still hard to watch them go.

Make your tax-deductible gift today and together we can inspire kindness, happiness and healing in our communities one recycled bouquet at a time!