When celebrity landscaper Chris Lambton joined us for GROW – a series of events benefiting Random Acts of Flowers’ branches across the country – we knew that his presence would add some stardust to the occasion. What none of us realized, however, is what an impact Chris’s participation in the RAF mission – arranging bouquets and delivering them to hospitals and healthcare facilities coast-to-coast – would have on him. As he and his lovely wife Peyton eagerly await the arrival of their first child (due any day now), the experience gave Chris a chance to think about the impact flowers have had in his own life, as well as experience the joy of delivering hope and encouragement first-hand .

What motivated you to take to the road for two weeks for GROW at a time when you own family was about to grow significantly with the birth of your first child?

(Laughs sheepishly) Have you ever been around woman in her ninth month of pregnancy? The emotional swings were getting pretty unpredictable!

No, seriously, I have known and worked with Cindy McConkey Cox when she was Scripps Networks, the parent company of HGTV and DIY Network. She’s now the COO at Random Acts of Flowers, and once she shared with me the mission, I was in. 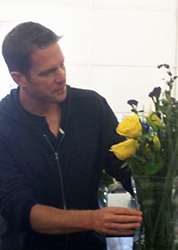 It resonated with me and my own experience as my mother battled MLS. My mom was a gardener and loved flowers. So when her health really started to decline and it was hard for her to putter in her garden any more, one of her friends brought her a bouquet every week, and I saw how much that meant to her. After Mom passed, her friend continued to bring a bouquet to my dad and my brothers and me for the next six months, and it was an important part of our healing process.

All that is to say I know the impact flowers can have on someone’s emotional health and well-being.

What did you do at each of the branch locations?

I was the guest speaker at the GROW fundraising events, but really they allowed me to be part of the mission. So of course I met donors and sponsors. But the fun part was going into their workshops and arranging flowers alongside their volunteers and even better was going on the deliveries. I delivered bouquets to hospital patients in Tampa Bay, people fighting Parkinson’s Disease in Knoxville, veterans in Silicon Valley and the elderly in a low-income senior care facility in Chicago.

Was there a favorite moment for you?

I really loved spending time with the volunteers. Random Acts of Flowers does its mission with thousands of volunteers who love what they do, working with the flowers and spreading hope and encouragement to those who are most vulnerable in their communities. But the deliveries. Wow! Every one of them was different. But the one thing that was the same – and the thing that I won’t forget – was how much it meant to each person I sat with and handed a bouquet to know that some stranger, someone they’ve never met, cared enough to bring a little joy into their day.

Editor’s Note: On November 22nd, Chris and his wife Peyton welcomed their daughter, Lyla, into the world. All of us at Random Acts of Flowers send our heartfelt congratulations!

Make your tax-deductible gift today and together we can inspire kindness, happiness and healing in our communities one recycled bouquet at a time!